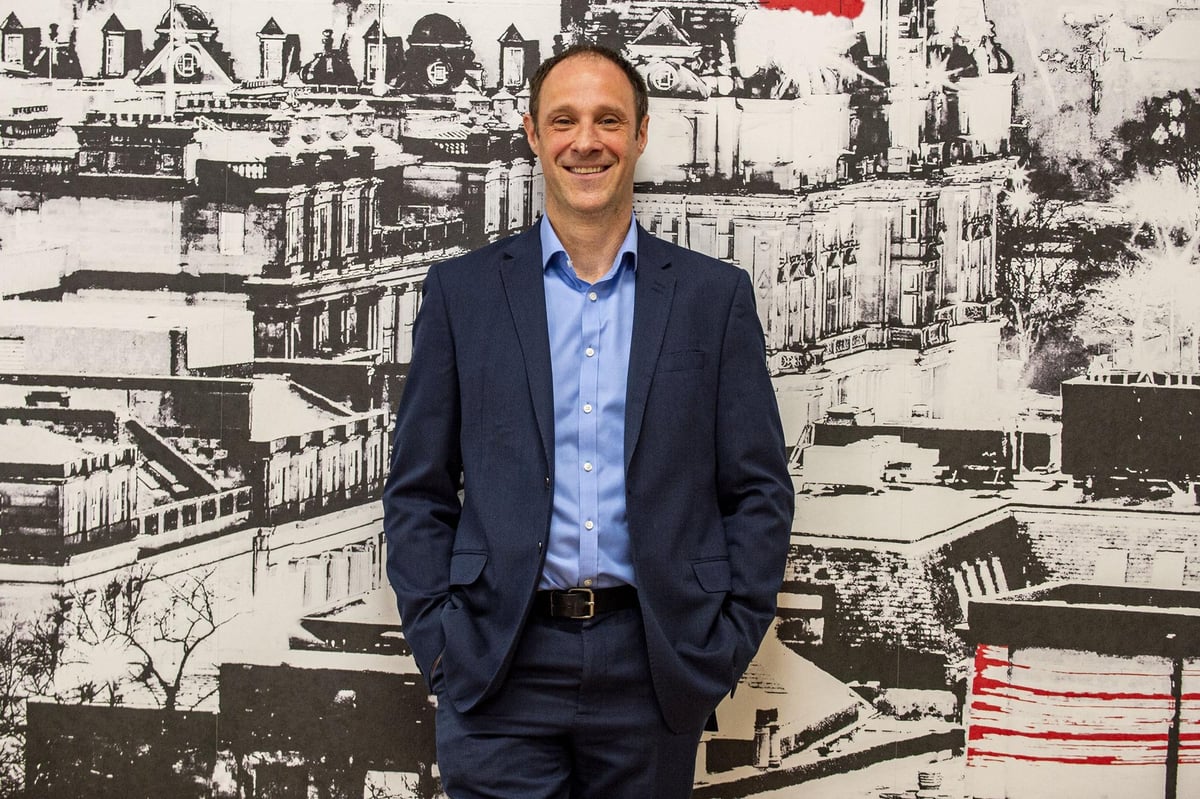 The London-based company says it advises clients ranging from individual landlords and buyers to major developers, investors and corporate tenants, with over 20,000 staff operating from 488 offices across 57 territories.

His roots date back to 1896, with deals he has helped secure since, including a private sale of Stonehenge and the sale of Chartwell to Winston Churchill.

Register to our daily newsletter

The business opened in Edinburgh in 1913 and today Mr Steele is also responsible for the day-to-day running of its office in Scotland’s capital. He worked in investment teams in London and Scotland, and left DTZ – now known as Cushman & Wakefield – to join Knight Frank, where he is a partner, in 2010.

Deal volumes in Scotland have held up remarkably well during the pandemic and we have seen prices hold steady at pre-Covid levels and even harden in key areas of the market – prime offices, industrial and retail warehouses retail are the obvious examples.

One of the main reasons investors are still looking to buy in Scotland is that professional markets have also held up surprisingly well. The pre-letting of 280,000 square feet in M&G’s The Haymarket project by Baillie Gifford amid the pandemic has been a remarkable indicator of the health of Edinburgh’s office market.

In the future, do you expect big changes in the distribution of the origin of investment capital? Looking specifically at overseas investment, this funded the majority of deals in some years, but fell to less than half in 2021…and what is the impact of Brexit?

Sources of capital will fluctuate over time, but what is essential is that the Scottish property investment market has now become truly global. It is no longer dominated by British investors and is attracting strong interest from all corners of the world. There is a lot of money looking to invest in Scotland from both the Middle East and the US at the moment, as well as continued interest from European and UK institutions.

The drop in numbers in 2021 appears to be just a hiccup caused by a small number of large deals made by UK investors, which skewed the numbers – the long-term trend should continue to show strong interest from foreign capital. It’s hard to get a clear view of the impact of Brexit right now because so much is happening around the world. I think it will take some time to shake.

The businessman is an advocate for mentorship, saying “If I can help people with their career development in the same way others have helped me, then that would be great.” Pictured: Lisa Ferguson.

It’s complicated and there are a number of different aspects to watch, such as whether European buyers are cooling off relative to the UK and whether other international investors are replacing them.

Trends in shopping habits that were already happening accelerated during the pandemic, with significant growth in online shopping boosting the industrial sector. Retail warehousing has also done very well as people have become more accustomed to shopping in a retail park environment rather than going to a city center.

Yields continue to tighten and all research suggests tenant demand will exceed supply as rents continue to rise. Soaring construction costs at the moment may well further restrict the development pipeline in the short to medium term.

In terms of the office market, what does 2022 hold for Scotland’s key cities, and how has the growth of the booming tech sector increased demand for prime space?

The year is shaping up to be strong again – occupier demand remains robust and strong sales are expected in both Edinburgh and Glasgow.

The pandemic has accelerated the transition to a better working environment – companies want their workplace to be a stimulating and collaborative place in which their staff want to work, rather than the old-fashioned idea of ​​rows of desks, so it’s probable that there is a leak towards buildings of quality and adapted to the use.

This will also be influenced by the environmental, social and corporate governance program, which has become extremely important very quickly for owners and occupiers.

The tech sector is really big, especially in Edinburgh and Dundee, while Glasgow recently held its first Tech Fest. It’s kind of a snowball effect where companies want to be close to like-minded organizations.

We believe demand for technology occupiers will continue to increase in each of these cities as Aberdeen begins to emerge from the challenges of the pandemic, with office occupancy in the first quarter of 2022 as high as it was. throughout the exercise. from last year.

What about bricks and mortar retail? There are concerns about its longevity, and major anchors like Jenners in Edinburgh are set to change use – you cited the potential for conversion of retail space into prime office buildings…

Our main streets have been struggling a lot lately, but there are more and more signs of recovery. Retailers have adapted their offerings to take into account new ways of shopping and it is exciting to see the revival of traditional shopping areas in city centres.

If you take Edinburgh, for example, we see Princes Street becoming much more of a leisure supply, while George Street has rebounded surprisingly quickly from a retail perspective, with terms agreed for eight of the street’s 11 units which were previously vacant.

What was the biggest real estate transaction of your career and why?

I would say it was the sale and leaseback of TSB bank in Falkirk. It was not serious but it was my first. I didn’t really know what I was doing and remember standing by the fax machine on the closing date hoping for at least one offer.

In the end, that’s exactly what I got – an offer, but it was a good one and, despite my naivety, the deal went down well. It was a strange mixture of relief and elation – probably still the way I feel today when a deal is done!

You are a passionate environmentalist and a key driver behind Knight Frank partnering with Surfers Against Sewage and announcing its bid to become a plastic-free company. Could you explain more about this?

I have always had a keen interest in the environment, especially the marine environment. I have been a member of the great charity Surfers Against Sewage since I was a student in Aberdeen. Recently, he has worked to encourage communities to commit to reducing their use of single-use plastics.

I was sitting at home on a Friday night and decided to email our managing partner suggesting they go plastic-free. It was a good idea at the time, but I wasn’t so sure when I didn’t get a response! It turned out he was away for the weekend and responded on Monday saying he was all behind the idea.

Since then, it’s been phenomenal – all of our staff have received reusable coffee cups and drink cans, and we’ve significantly reduced our plastic footprint across the business. I think it’s a sign of how big business has changed – it’s no longer just about making a profit, but also about your impact on society and the world at large.

Have you had a mentor or mentors in your career and do you mentor others? If so, what benefits have you found?

I think mentoring is extremely important, especially for young people. I’m lucky to have worked with a few people in my career who mentored me and who I knew I could totally trust and rely on – it makes such a difference.

I sponsor young people through The Prince’s Trust and have also signed up for our in-house mentorship program at Knight Frank. If I can help people with their career development in the same way others have helped me, then that would be great.