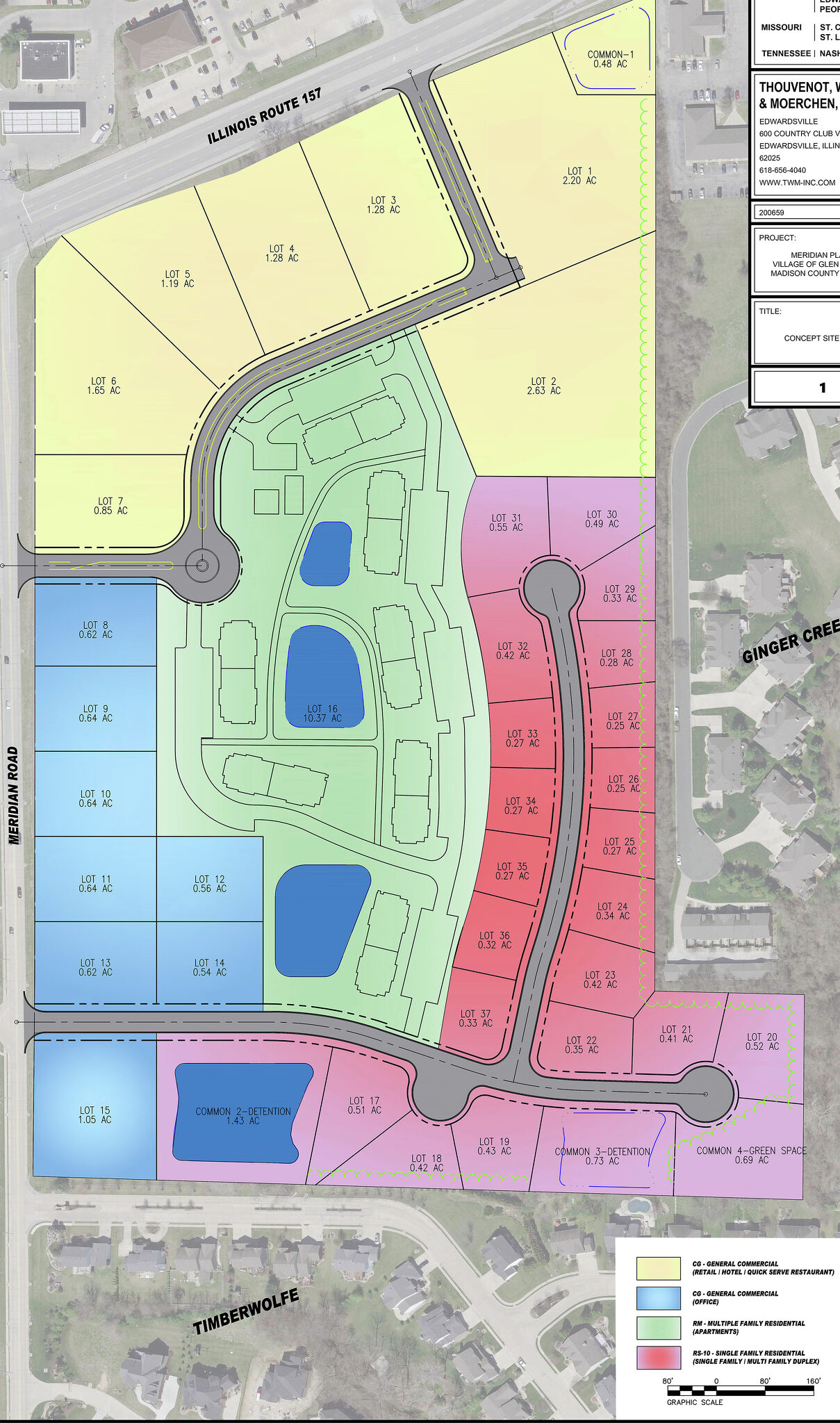 Glen Carbon’s finance and administration committee on Tuesday paved the way for the creation of a business district at Meridian Plaza, similar to the one set up at Orchard Town Center.

Limited earthworks had already begun last week at the 44-acre site, located at the southeast corner of Highway 157 and Meridian Road.

The preliminary site platform included commercial/commercial uses on the north end, a string of office/retail buildings along Meridian on the west side of the development, as well as 144 luxury apartments and 29 single-family homes. Developer and attorney, Chris Byron, representing Plocher Construction, requested a business district for the project’s commercial areas, on the north end near Route 157 and on the west side along Meridian Road. None of the residential areas would be included in the business district.

“Me and the mayor [Bob Marcus]we sat down with [developers] Chris Byron and Scott Plocher to hear their request for a business district,” village administrator Jamie Bowden said. “What we’ve done in the past, what that would be, is an extra percent [tax] or what I would call a use tax, a service tax. Through a developer agreement, we would agree on what we would pay them back.”

The first step is to approve a pre-financing agreement, he told the committee. “[Plocher] would pay the city $40,000 to cover our costs, and then we hire Keith to do the feasibility study.”

Keith Moran of Moran Economic Development in Edwardsville will receive nearly $20,000 to determine the eligibility and/or feasibility of the proposed business district. Moran attended the meeting virtually. He said a public hearing would be involved and the whole process would take two to four months.

Bowden asked Moran if it mattered that mass leveling had started on the site before creating a business district, as he did not want to create problems or delay on the site. This sparked a round of repetitive questions and answers between Bowden, Byron, Moran and committee chairman Ben Maliszewski. Moran agreed that the business district should be done first. Byron questioned this.

“It’s just mass leveling. I’ve been down this road before where we’re going to start mass leveling, but we would stop before we start full construction until the business district is finished,” said said Byron.

Byron said the work involved stormwater, roads, and adding lanes to Highway 157 and Merdian Road, which he said appeared to be 95% of developable costs, compared to the cost of mass grading.

Trustees voted 3-0 on Tuesday and unanimously to use Moran for professional and consulting services related to building a business district. Besides Maliszewski, the committee is made up of Alderman Nekisha Omotola and Alderman Mike Sonderegger.

The full board will vote Tuesday on the final area plan and final section flat for the first two phases of the project.