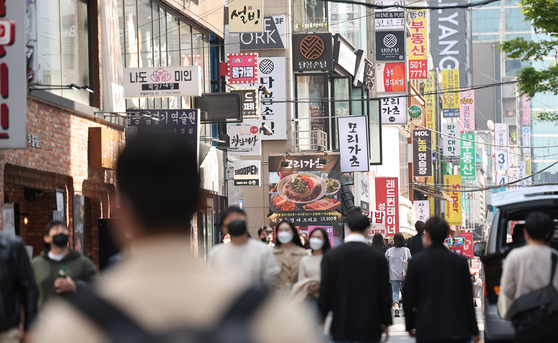 Gangnam, Seoul, saw an increase in the number of people on Sunday as social distancing regulations eased. [YONHAP]

Even Gangnam, the country’s hippest shopping district, has not escaped the global pandemic.

Many of its stores were forced to close, while incomes plummeted for those who survived.

According to a Korea Agro-Fisheries & Food Trade Corporation (aT) study released on Monday, the number of stores in the district’s most popular area fell by 16.7 percent between 2019 and 2021.

In January, 335 restaurants were still open.

Revenues from these restaurants have fallen 45% over the past two years.

The stores that were studied are those located at exits No. 11 and No. 12 of Gangnam subway station and at exits No. 4 and 5 of Sinnonhyeon station.

Strict social distancing regulations, including a limit on the number of people who can eat together and curfews for businesses, have had a huge impact.

Many shops on the first floor, considered prime real estate, are currently vacant.

“The area studied by aT is a fashion-sensitive commercial district,” said Kim Young-gap, professor of hospitality management at Hanyang Cyber ​​University. “It is an area where there are trendy restaurants and as such, there is a huge influx of young customers.

“It seems that even young people have reduced their spending as they reacted sensitively to Covid-19.”

The price increase was affected not only by rising ingredient prices, but also by rising labor costs.

Higher prices may have hit businesses.

The agency published a study on food trends in November.

Comparing 2019 with June to October 2021, revenue in all but two areas declined.

Restaurants, especially those selling alcohol, have been hit the hardest by social distancing.

One of the biggest changes as a result of the pandemic is that customers are now emphasizing hygiene.

In a study conducted between September and November last year among 1,341 people aged 20 to 69, 92.1% said they considered hygiene a key factor when choosing a restaurant.

As the government has removed almost all social distancing restrictions, business in these areas is expected to rebound.

“Since the beginning of this year, as the government began to ease regulations, sales in major trading districts have shown signs of recovery,” said Kim, a professor at Hanyang Cyber ​​University. “Although business will not immediately return to pre-pandemic levels, with more people going out, spending is expected to increase.”

CBS Solar maintains its status as a carbon-neutral company